October 05, 2015
This is a part 2 of my efforts to fix my Whirlpool Washer and the dreaded F21 error code http://www.chromiloamin.com/2014/09/how-to-fix-error-code-f21-water-not.html. This code means there is a slow drain issue with the unit and that it could easily be fixed by emptying the contents of the lint trap or replace the motor. I have already removed all the contents of the lint trap (which had a lot of gunk buildup) but the F21 error continued to persist so I thought that the next logical thing to do is to replace the drain pump motor. Maybe the lint trap buildup just caused the motor to malfuntion.

The water pump part number 8540024 was replaced by part# W10130913 and I was able to source it cheaply from Walmart US for US$70. I could have purchased it from ReliableParts and have it shipped to the store which is close to my house but that would have set me back $173. I ordered thru Walmart US and had it shipped to my mailbox at Blaine via 5dPackages (they only charge $2 for packages under 30lbs). After picking up the package, I followed the instructions here https://www.youtube.com/watch?v=1ShBSvrPq3A to replace my old water pump. It was super easy. 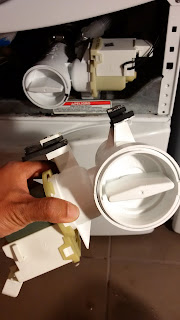 The moment of truth came. We had enough dirty laundry to test the washer, to see if the F21 error had been resolved. Success! I no longer see this dreaded error but the clothes were still wet. It didn't spin at the end of the normal cycle (ran for 55 minutes) which is why I think the clothes are still wet. I set the dial to Drain/Spin cycle to see if I would have to replace the belt that makes the drum spin. This cycle takes 15 minutes to complete and it does spin quite fast. It even successfully drains the water and results in drier clothes.  Total wash time is 55+15=70 minutes. 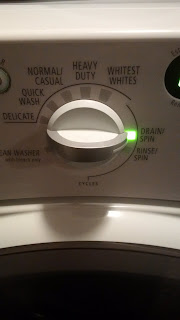 Have you seen this before? I think there is sensor that is not calculating the load correctly and therefore not going into the final spin cycle. Haven't been able to find anything else about it on the interweb however. I think I'll let this one ride until it breaks again at which point I'll head over to The Brick for another front-load washer.