Looking for Ideas for a Short And Sweet Family Vacation?

August 05, 2012
We were planning to go to California to Legoland and Disneyland but decided that we will do that when my youngest is a little older. We kept it local instead and just got back from a fun-filled vacation to the Vancouver Island and Seattle. We found that it was better to save on hotel fees and spend those savings on attractions and of course on shopping instead.

Ferry Ride to Vancouver Island
We took the Spirit of British Columbia ferry ride to Swartz Bay from the Tsawwassen Terminal for $82 one way. This included two adults and two kids in a sedan. The trip was 2 hours long and scenery was spectacular. 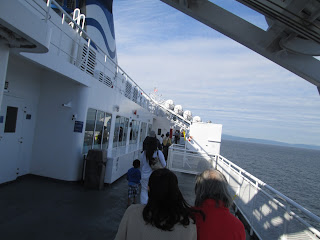 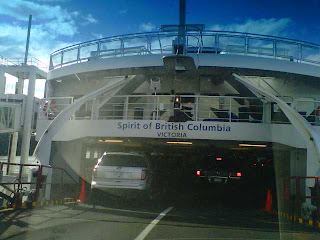 Chinatown in Victoria
We parked in Chinatown and had some dim sum at Dynasty Victoria Restaurant. It was decent but a little expensive costing us about $60 for lunch. We used up our 2 hour meter parking by walking around the area. We found hidden shops in between tight walkways between tall brick buildings. 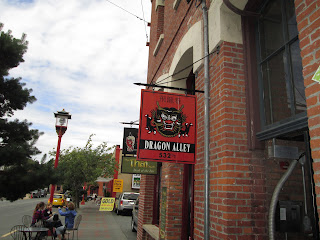 Royal BC Museum
Our target destination for this day-trip was the museum so we headed over. My biggest beef was parking or lack of it. We found public parking on a side street on Douglas Street for $5 every 2 hours. We paid $16 each for each adult for the exhibit only and kids were free. 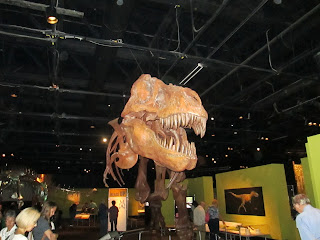 Victoria's Inner harbour, Ship Point Night Market
We walked around the inner harbor, had some ice cream, looked at all the wares sold by the local vendors, and got out of the sun really quick. There was a night market starting at 7pm but we didn't stick around for that. We took the ferry back into the mainland and slept at home before heading south into Seattle.  Here is more info on the night market at Ship Point:
Date/Time: June 27 - September 17, from 7 p.m. - 10:30 p.m.
For more info: gvha@victoriaharbour.org
http://www.victoria.ca/EN/main/departments/parks-rec-culture/recreation-culture/public-markets.html 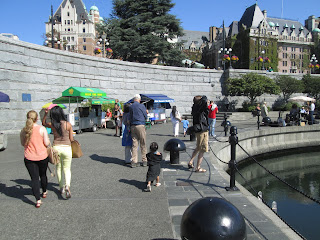 The Red Lion Hotel at SeaTac/Airport
Using www.priceline.com we booked a hotel near the SeaTac airport because it was so much more cheaper around this area plus it was only 6 minutes away from Fun Center and Westfield Southcenter Mall in Tukwilla. We paid $129/night for this decent 3-star hotel. Parking wasn't free and would have cost us $10 per day if the nice concierge didn't offer that free this time for being new guests at the hotel. The other good thing about this hotel is the location. It was only 3 blocks away from the Link Light Rail terminal which we used to get to Seattle Downtown.
(18220 International Blvd, Seattle, WA 98188)

Westfield Southcentre Mall
We headed into the mall immediately to make sure we purchased tons of bagoong and alamang. Next to seeing the Seattle Aquarium, this was our target destination heading into Tukwilla. We almost purchased a whole year's worth of supplies because we can't get these easily in BC. We then had our fill of classic halo-halo , palabok, chicken joy, and tapsilog. Our favorites stores include Seafood City, Jolibee, Chow King, and Red Ribbon Bakery. We noticed that Tokyo Tokyo Grill beside Chow King was empty everytime we were here. Everyone seems to stay away from this place for some reason. I have a feeling it won't be around the next time we come here, just saying.
(1368 Southcenter Mall, Tukwila, WA 98188; Contact: (206) 316-4258; Hours: 8am to 9pm daily; http://www.westfield.com/southcenter/). 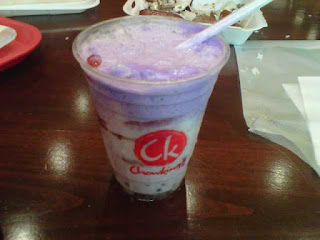 Fun Center
This place was less than 6 minutes away from the Southcenter Mall so we took the kids over to check it out. There was a two-storey indoor arcade and various outdoor activities. We went on the electric Go-karts, traffic school cars, and motorized bumper boats that let you squirt water. Prices range from $5 to $7 per person, which is essentialy 22-30 tickets per ride.
(7300 Fun Center Way, Tukwila, Washington 98188 | 425.228.7300; http://www.fun-center.com) 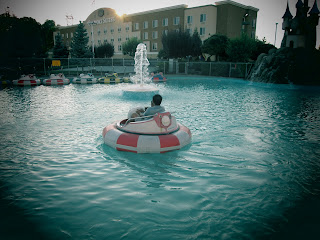 Link Light Rail
We purchased the daypass for $5.50 for each adult and kids were free. Taking the 37 minutes ride end-to-end to Westlake Center in downtown Seattle via light rail beats driving in traffic. Not to mention what it would have cost us in parking fees, one can't go wrong with taking public transit. One thing to watch out for is that our credit cards wouldn't work at the ticket dispenser. We had to go to a nearby ATM at one of the hotels to withdraw cash and I don't need to remind you that they ding you as much as $3.50 in fees for each withdrawal. Just come prepared with cash.
(http://www.soundtransit.org) 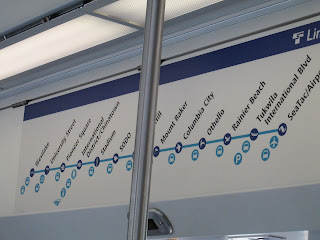 Seattle Aquarium
This was our main destination for this 2-day trip into Seattle and was worth it. The cost was $20/adult was free for kids under 4 years old. Westlake Center link rail terminal was only three blocks down the pier so it was a nice walk. The only thing you might find a little stressful is getting down to Alaska Way from the Pike Public Market. Those with strollers will want to go in through the third pink entrance in the market to get to the skybridge. At the end is an elevator to the street level parking lot, which let's you get on to Alaska Way. We were impressed with the Aquarium because it was situated right on the pier and used the waters from Puget Sound for many of the actual exhibits. The sea and river otters were our favorites. The underwater cavern was a close second. 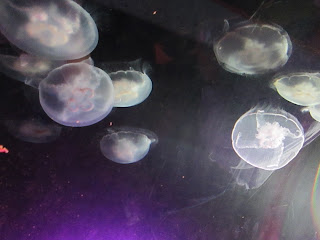 Pike Place Public Market
We headed back to the bustling public market and had some lunch. We went to Beecher's for some grilled cheese sandwich and watched these two workers through see-through glass handmake cheese in these huge vats. The place was packed with people and spilled onto the street but you still see one or two vehicles try to inch their way through. City should just close this street to foot traffic. If you have strollers, it's difficult to enjoy your walk through the market.
(http://www.pikeplacemarket.org)
(http://www.beechershandmadecheese.com/locations/seattle.aspx) 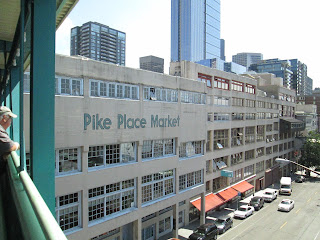 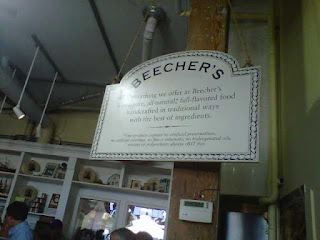 Seattle's "Town Square" at Westlake Center Plaza
This is located on the corner of 4th Avenue and Pine Street and is a very vibrant spot. We noticed at least 2 police officers on standby and 2 others on mounted horses. Nearby there was a chess game going on with huge movable pieces on a giant chessboard. On 4th Avenue there was a tour bus shaped like a huge boat with Ride the Ducks labelled on each side. A bullhorn was used by the driver each time they passed through the towncenter inciting load cheers from his passengers. One can't help but look.
(http://tickets.ridetheducksofseattle.com) 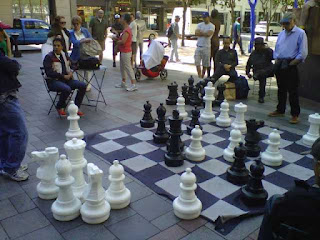 We crossed the street into Westlake Center and went up to the 2nd floor to have some snacks in the foodcourt and then lined up to take the monorail to Seattle Center. It cost us $4.50 each adult for a two-way ticket and kids under 4 year old were free. The ride was less than a few minutes long and had a driver, unlike the Link Light Rail which was unmanned.
(http://www.seattlemonorail.com)


Seattle Center
Having been to the Seattle Center multiple times (a decade ago now), we didn't go up the Space Needle or go into the botanical greenhouse or go into museum or go into the space center. We walked around and headed for the musical water fountain instead.
(http://www.seattlecenter.com)

International Fountain
The musical water fountain was packed with people because it was so hot that day. Everyone young and old was in there running around wetting their pants so to speak. Kids had their cotton candy and we spent the afternoon cooling off.
(http://www.seattlecenter.com/locations/detail.aspx?id=8) 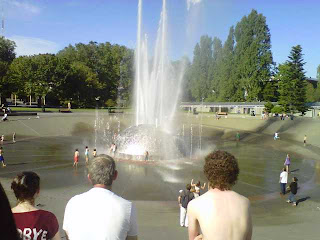 This trip was very enjoyable and was much cheaper than a pre-packaged trip to Anaheim and San Diego via priceline.com or expedia.ca. I would recommend doing the island hop and then a Seattle trip if you have a week off.

Thank you for your feedback.