Rondriso Farm in Cloverdale is run by Very Nice People 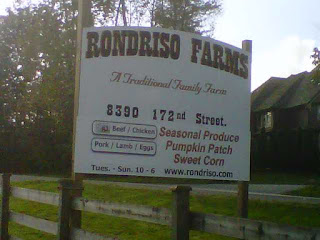 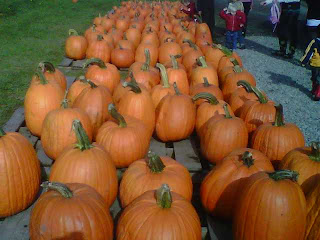 People are naturally good, especially Farmer Ron and his crew at
Rondriso Farm www.rondriso.com, who found my lost camera in pumpkin
patch.

A week ago on October 13th, my little pumpkin had a school field trip
to a farm to learn about cows and ride a truck to the pumpkin patch.
We had a lot of fun, and probably a little too much because my wife
dropped our camera filled with hundreds of photos saved on a 4GB
memory card. We took turns looking for it but it was next to
impossible, like searching for a needle in a haystack (or pumpkin
patch for that matter). We eventually gave up and Farmer Ron said that
they sometimes do turn up when his crew goes and clears up the patch.
I thought it was a lost cause, until I got the call from Ron
yesterday. Sweet. A family friend found it buried in the soil, so I
was surprised it even turned up. I guess we must have trampled over it
while making a sweep of the patch field.

Farmer Ron and his crew are one of the good guys.

September 29, 2019
My kids and wife flew out to Niagara Falls immediately when the school bell sounded. That's how excited we were to start out on our summer vacation. I could only take 2 weeks off from work so I stayed behind and planned to fly out end of July. I was a bachelor until then.

Niagara Falls from Jun 29-Jul 14 The adventure starts in Niagara Falls where my in-laws live. My  kids and wife bonded with cousins and extended family for about two weeks. Starting July 6 they went camping at Fifty Point Conservatory Area in Hamilton and boating in Lake Ontario.

My kids rode at top speed on the boat and also got pulled behind the boat on a three-person inflatable dingy.

Their adventure continued south to Washington DC after that, driving for 7 hours.

December 25, 2013
Our kitchen garburator had been out of order for the past few weeks and I thought I would give it some tender loving care this Christmas Holidays because we'll need it. It's a Mainline Model 1900 and has been very dependable for the past 6 years. This happened a few times before and all I did was run a wooden barbeque stick through the serrated edges of the garburator blade to dislodge whatever gunk was in there and that did the trick. It didn't this time and I was ready to spend some money.
I was tempted to call our plumber and have them fix this for me (here take my money) but I thought to myself, how hard can this be. I was also tempted to take the whole thing apart to clean whatever was causing the blade to not spin but I'm sure I would have lost a few fingers or two if I did that. What did work was using something everyone already has lying around the kitchen - a butter knife.
Take the butter knife and find the gap in the blade to insert the tip of the knife int…
Post a Comment
Read more

October 29, 2016
My wife, kids, and I recently attended a 2-hour food seminar with a registered dietician at our local Fresh St Market and learned a thing or two about healthy eating. Someone once said this about healthy eating and nutrition - that they are "already aware, and just need to implement it". I assume the "it" is the healthy eating part which to me means that until it is implemented, then they are eating less healthy in the meantime. I think this is where the extra learning comes in that comes with attending these quick seminars. If anything, learning that this is a way of life and not a form of diet is worth the cost of going to this very free seminar/tour.

DISCLAIMER: These are my own notes and may not be accurate and not necessarily reflect what the dietitian said. It's all reliant on my note-taking skills that day.

Eating out at restaurants = no.
Prepared foods = yes.
Eating well is not not expensive.
Plan on buying 5 dinners when you go grocery shopping and use…
Post a Comment
Read more