September 06, 2011
The Labour Day weekend was fun-filled and we made sure it was spent in the great outdoors while we still have some summer left. We went to Aloutte Lake in Golden Ears Provincial Park on Saturday for a
day-picnic and I would say this place is as nice as Cultus Lake in Chilliwack.

The day before the trip, I printed Google Map directions (which says it takes 1hr 30min to get there) and a printout of the grounds so that we know where to meetup with other family and friends. We didn't know
how to get there so we thought it was a great idea to go with others who have. Our other friends drove ahead in one car and we followed. They were armed with a GPS device and the driver's word that he knows how to get there. That was a big mistake. We left at 10:30am and didn't get to the day-use picnic site until close to 1:00pm. That's about 2hrs 30min spent driving around trying to get there. It was very frustrating.

/Mistake #1 - Not Coming Prepared
The first mistake we made was following someone who didn't come prepared. They had no printed maps and were relying on GPS and memory.

/Mistake #2 - Trust GPS devices
Second mistake was following someone who placed more trust on GPS devices than printed maps. I realized we were lost when we started going around in circles in a residential neighborhood. When we
eventually stopped (after numerous revolutions around the neighborhood), I handed the printed map over to them so that they could lead correctly. Instead of taking 232nd street to Fern Crescent, they followed the GPS which told them to take Dewdney Trunk Road all the way to Stave Lake. This was a completely different lake altogether. It does tell you how to get to the correct lake eventually but you have to make sure it is the shortest route.

/Mistake #3 - Not Asking for Directions Immediately
Stop immediately and ask for directions. The driver in the other car should have admitted to being lost early on. He insisted it was still the correct route after we had been driving over UNPAVED gravel road
at Stave Lake for over 30 minutes. Kids woke up from all the bumpy ruggedness of a road and wife was very worried because we were clearly lost while the other car kept driving on. When we finally stopped, I
made the decision to drive us back to Maple Ridge and take 232 Street to Fern Crescent like it said in the map. I took the lead and asked them to follow me.

/Mistake #4 - Not Planning on a Meeting Place
There was no cellphone coverage at the lakes so make sure you talk to everyone and agree on a meeting place. Get walkie-talkies to help prevent life-sucking time-wasting effort trying to find the lake using
moronic GPS devices.
When we did get to Aloutte Lake, all our frustrations magically lifted and we forgot about all the problems we ran into. We stripped into our bathing suits and dove in immediately with the kids. 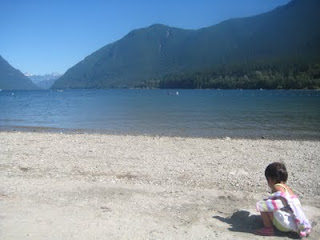 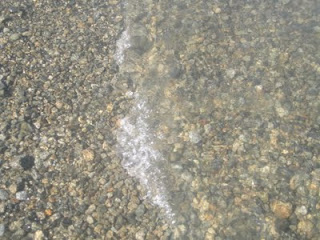 I flew a kite while swimming, we played some poker, and of course indulged in tons of food. It was awesome. We stayed until it got too chilly for the kids and I followed my brother on our way home instead. Can you blame me?

Have you ever gotten lost getting to Aloutte Lake?