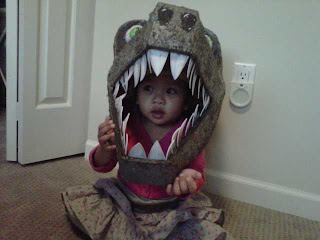 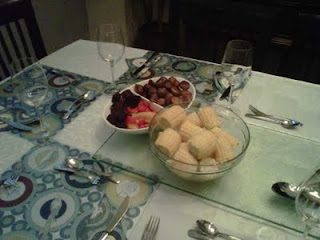 We had dinner last night at our friend's new home and had a great
time. They moved a few blocks away from their previous townhome and
into a gorgeous house, right beside the river. Loved the bathrooms,
high ceilings, and the backyard was set up so that you never have to
maintain it. There was talk of a hot tub in the backyard in the near
future as well.

We had a cozy dinner where dining room was expanded to include the
kids table. There was wine, pansit, salad, ribs, corn, baked peppers,
beets, and home-made desert. During dinner, an Apple iPad 2 and a
Blackberry Playbook was passed around for comparison. I got to try out
both devices firsthand and believe that I am now closer to making my
decision on which item to buy.

After dinner, we played some of the Nintendo Wii sports games. They
had a great family room set up for this. I lost in boxing, skiing, and
tennis. I found out that I was basically 'unbalanced' as far as the
Wii was concerned. Kids enjoyed themselves running up/down the stairs,
and my little girl even got to play around with a T-rex costume.

Rain did not dampen the mood. It was a great night.