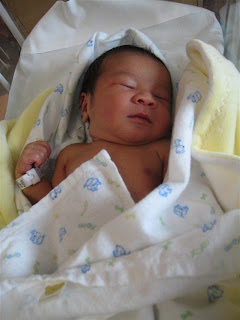 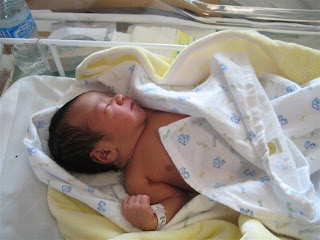 My wife gave birth to a healthy boy at Surrey Memorial Hospital birthing unit Tuesday evening on April 22nd at 7:32pm. Mom and baby are fine.

My wife Grace had to go through a long labor starting midnight on Monday when we had to rush to the family birthing unit to assess how far along she was. We had to wait a full hour at admissions before getting told that she was only dilated 2-3 cm and had to go back home until she was 4 cm dilated. How would we know she was much further along? We were told to count how long the contractions took when it occured and how frequent the contractions. When frequency was every 3-5 minutes and when it lasted a full 60 seconds, then we would rush back to the hospital to get re-admitted. It was hard having to determine exactly how far along Grace was because she was moaning and groaning in pain. We didn't have any sleep all night because she was in pain and I had the terrible responsibilty of waiting for her pain to occur at an interval. I had our wall clock in bed and was counting the seconds clock tick whenever her contractions kicked in.

Grace finally gave in and said we should head to the hospital because she couldn't take it anymore. We didn't have to wait that long this time around to be admitted and get checked. Fortunately, Grace was much further along at 4 cm so we were admitted in the delivery room which would then be used as her recovery room later on. I liked the service from then on. We had a great nurse Jennifer stay with us throughout and at one point, even had two nurses looking after Grace. They strapped on a baby monitor to Grace's stomach and proceeded to graph Kyle's heartrate. At various points, the graph would dip to under 99 bps whenever Grace's contractions hit. This was too low and the nurse correctly deduced that the baby may have swallowed some meconium. Two doctors

We were given some options for pain management and after talking it through, we decided to use an epidural to ease the pain Grace was having. Admistration of the epidural by the anesthetist was very difficult to experience because they insert a long needle into the patient's spine and get them to curl into a ball in order to do that. Pregnant women unfortunately have a hard time curling into that position because their big tummy is in the way. Regardless, watching the anesthetist do her job on Grace was probably one of the hardest things to do. After she was done, the freezing did its job on the lower part of Grace's body and she was finally getting comfort from it by not groaning and screaming through each contraction. Whew.

After Grace was comfortable, oxytocin was injected into her IV in order to stimulate contractions and get her to dilate fully to 10 cm. This took all night of waiting in anticipation until her cervix was fully dilated and she was ready to deliver. Time was around 7:32pm Tuesday, which would have been about 19 hours since early labor. Dr. Blackhart came around and used forceps to extract Kyle. Thought of forceps on a little baby's head just didn't do anything to quell my concerns and worries. Fortunately, everything went well and Grace didn't have to push too long to get Kyle out. It only took an hour. When he came out all bloody and the doctors placed him Grace's stomach that was the most wonderful thing to see. What a miracle. At that point on, I used my camera and video capabilities to capture everything the doctors/nurses were doing in the room. I wanted to take a snapshot of that every moment.